Spin Gold with Rumpelstiltskin in this New Twisted Tale Slot

It’s time to spin straw – and reels – into gold in iSoftBet’s newest twisted fairy tale; just be careful who you make your deals with!

There’s more than meets the eye in the disarmingly colourful and seemingly pleasant latest addition to the iSoftBet Twisted Tale slot series, Riches of Rumpelstiltskin Megaways. After all, this eponymous imp takes a woman’s firstborn son as payment!

Luckily, with 6 reels, 117,649 paylines and the ever-popular Megaways feature, you will be well-equipped to take on Rumpelstiltskin by finding out his tongue-twister of a name and consequently sending him into a rage.

Players will be thrilled by the new features such as the Rumpel Respins which has four upgradable boosters and the ability to win up to 5,000x their bet.

Get ready to take on this twisted fairy tale, save the baby and snatch back Rumpelstiltskin’s riches as you spin your way to gold.

Similar to its predecessors, Riches of Rumpelstiltskin Megaways follows a particularly villainous character from a well-known fairy tale. The villain and protagonist of this game is a conniving little imp who offers to spin straw into gold for the miller’s daughter to help her avoid death.

However, the favour comes at quite a big cost: her firstborn child. He agrees to return the baby if she can guess his name which she manages to accomplish after overhearing him say it whilst gloating: Rumpelstiltskin! Turns out there’s a happy ending to this dark and twisted tale after all, even if some versions end with Rumpelstiltskin gruesomely tearing himself in two. 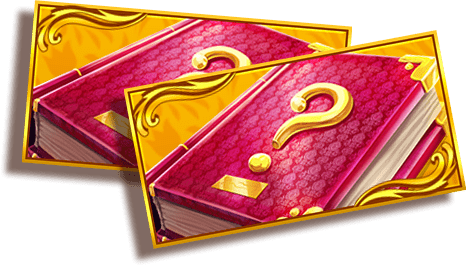 The first of the game’s unique features is the Mystery symbol.

These can appear on any reel and will all transform into the same randomly selected paid symbol, potentially creating more winning combinations.

Another way for players to win big is with the Max Megaways feature which can be triggered randomly on any spin.

This maxes out each of the reels to give that particular spin the game’s maximum 117,649 ways to win. 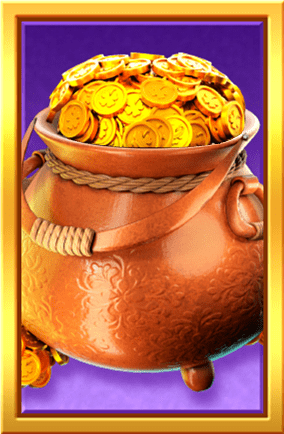 As the title suggests, players should be on the look out for Rumpelstiltskin’s riches since the Scatter symbol is represented by a pot of gold.

The Rumpel Respins bonus round activates when 5 or more Scatter symbols land on the reels.

Players start the round with 3 Respins. If a Scatter or Booster symbol lands on the reels, the number of respins is reset to 3.

At the start of this feature, the Scatter symbols become sticky and the rest of the grid will be emptied and remain blank. Only new Scatter symbols are able to land on the reels with each spin but not on the top tracker reel.

All Scatter symbols that land during the bonus round will become sticky and the total multiplier value will be added to the total winnings when the feature comes to an end.

Like all other Megaways slots, this game features a familiar top tracker reel that adds a symbol to the top of reels 2, 3, 4 and 5. While it operates no differently from its kin in a standard Megaways slot, it truly shines when the Rumpel Respins bonus round is active.

During the bonus round, only Booster symbols can appear on the top tracker. Collecting three of the same type of Booster symbol will activate its respective power-up. Each Booster can be won a maximum of 3 times and will be upgraded each time it is activated after the first instance. There are four different types of Boosters with different effects which are as follows:

Check Out the Previous Twisted Tale Slot Games Too!

The Sheriff of Nottingham was released in 2020, putting a twist on the common Robin Hood theme by focusing on the antagonist: the sheriff going after the merry men. Featuring 5 reels and 25 paylines, it became the start of the ongoing Twisted Tale slot series.

The next instalment was the Camelot-based Morgana Megaways which is themed around the eponymous villainous witch of Arthurian legend. It introduced the popular Megaways format to the series with 6 reels, 117,649 ways to win and more mystical features to enjoy.

A few months later, the Twisted Tale series returned with the Queen of Wonderland Megaways which is set in the cruel Queen of Hearts’ palace. This 6-reel, 117,649-ways-to-win slot game came with a variety of dramatic new bonus features to explore such as two new bonus games.

In 2021, Moriarty Megaways which centered on the great Sherlock Holmes’ most iconic antagonist and nemesis, Professor Moriarty, was released. It has 6 reels, 117,649 ways to win and a unique free spins feature which plays across three sets of reels.

Brides of Dracula Hold and Win joined the Twisted Tale slot series with 5 reels and 20 paylines. It took a different path from its predecessors by introducing the Hold and Win Respins feature along with four modifiers into which players could sink their fangs.

To end the year with festive cheer, the 6-reel, 117,649-ways-to-win Scrooge Megaways was released. It brought back the ever-popular Megaways feature and introduced themed jackpot scatters for increased win potential.

The Twisted Tale slot series returned in 2022 with Musketeer Megaways: Richelieu Riches, starring the infamous Three Musketeers in this 6-reel, 117,649-ways-to-win instalment. It introduced an innovative dual-game system with the default 1ForAll mode and the All4One quadruple-reel set mode.

Merlin’s Revenge: Morgana Falling Megaways, the follow-up of Morgana Megaways, brought the series back to Camelot with 6 reels, 117,649 ways to win and a unique symbol collection bonus round. With a chance to win 28,988x their bet, fans found it an exciting slot game and a worthy successor.

Rise of the Genie was a particularly innovative new addition to the Twisted Tale slot series. It features 3 reels, 5 paylines and a unique way to accumulate wins in the form of three different prize ladders to climb with wins. However, players had to watch out for the evil genie halting their progress.

Fans were surprised by the unexpected sequel Sheriff of Nottingham 2 which brought back the hunt for that wily Robin Hood. With 5 reels and 20 paylines, the sequel stood out with new features such as the Hold and Win Sheriff respins and more. 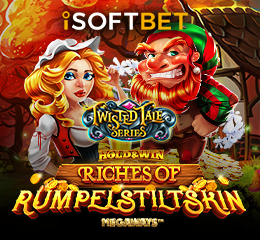 Take a step into another twisted tale and spin your reels into gold!

If you know your fairy tales, I’m sure you’ll have figured out instantly that this colourful landscape hides a sinister story. The poor miller’s daughter trusted the wrong imp when she agreed to let him spin straw into gold and was shocked when he asked for her firstborn child in return!

It’s no surprise that the cheeky imp has quite the hoard of riches ready for the taking with his special abilities but I learned something interesting: Turns out all you have to do to get your hands on it is guess his name… and I just so happened to have overheard him gloating and singing it: Rumpelstiltskin!

Do you have what it takes to defeat Rumpelstiltskin and claim his riches? Then gear up for a trip into this twisted fairy tale to spin your way to gold!