Enjoy 4 Times the Fun Daily and 6 More on Weekends

Claim up to three different bonuses which are:

If you’re viewing this page on a long weekend, we have an additional surprise bonus called the Six-Spin Wind-Up Weekend you’re going to love!

Six-Spin Wind-Up Weekend – What is this bonus?

Claim free spins based on the number of deposits of at least $25 that have been made throughout the stated promotion period. A different number of free spins will be available depending on the total deposit count according to the levels below:


How do I claim this bonus?

Unlike a lot of people, I don’t think four is an unlucky number and I’m going to prove it with my new and quirky bonus bundle!

It shouldn’t surprise you to know that luck gets discussed a lot around here between my friends and even myself. Almost everyone has some kind of quirky little thing that they believe will help them win and I’ve pretty much seen everything from using dice to decide which pokies to play to wearing that one pair of socks while spinning some slots.

However, the most popular one has to be lucky numbers… and of course that leads to talk of unlucky numbers like four. Flapdoodle, I say! There’s no such thing as an unlucky number to me and I’m more than happy to prove it in a way that’s going to change my friends’ minds: quadruple my quirky presents to them so they can have quadruple the fun every day! (And maybe even more than that on weekends!) 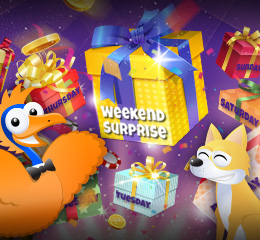